Ivana Bacik has become The Labour Party\'s 7th sitting member of the Dail, having been elected to the Dail tonight (09/07/2021) in a By Election in Dublin Bay South. She top the poll of 1st preference votes with 30% support, far exceeding her party\'s performance in recent polls which put them between 3% and 6% support. Government party Fine Gael were in second place with 26% support, while opposition party Sinn Fein had just 16% of the vote. While The Green Party lost its footing in this constituency it still did far better than the Fianna Fail party, which only managed a 5% of the vote. Trinity College Dublin will now have a by-election to vote in a new member of the Seanad.

The Sunday Times/Behaviour and Attitudes poll shows 30% support for Sinn Fein. The poll also shows a rise in support for Fine Geal with a 29% share of the vote. Fianna Fail is at 20%, while The Green Part is on 6%. Other parties and Independents are on 16%.

The latest political poll suggests that Fine Gael would get 37% of all first preference votes with opposition party Sinn Fein getting 26%. The two other government parties don\'t do as well as Fine Gael with Fianna Fail getting just 12% and the Green Party on 5%. Others and Independents are on 20%. The poll was conducted for The Irish Daily Mail on Sunday by Ireland Thinks.

The Dáil met on Thursday (20 Feb) following the General Election 2020. Seán Ó Fearghaíl retained the Ceann Comhairle position, winning the chair against Denis Naughten. Micheal Martin was then nominated by the Fianna Fáil party to become Taoiseach, he received 41 votes in total, with 4 independent votes, from Cathal Berry, Seán Canney, Noel Grealish and Micheal McNamara. Sinn Féin then nominated Mary Lou McDonald. She received the most votes of all 3 nominees on the day with 45 votes cast in her favour. The sitting Taoiseach, Leo Varadkar, then received just 36 votes, one more than his parties 35 votes coming from Independent TD Seán Canney. 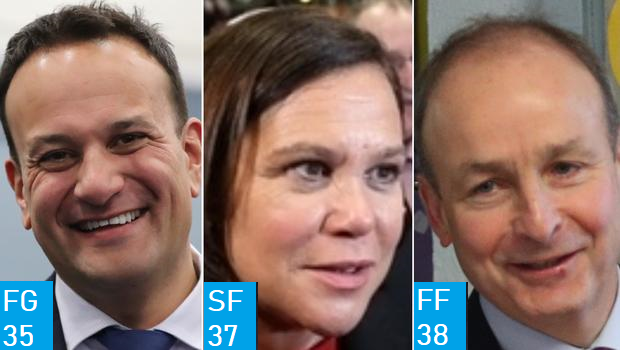 The Sinn Féin Party will continue to attempt to for a government with smaller left wing parties and independents. After a successful general election campaign SF are trying to form a government of the left.

The Fine Gael leadership has decided to go into opposition. The hope is that they will lead the opposition against a Sinn Féin/Fianna Fáil Coalition. Yesterday (18/02/2020) the Parliamentary Party of Fine Gael had a six hour meeting, at which they agreed to go into Opposition.